by Bruno and the Outrageous Methods of Presentation 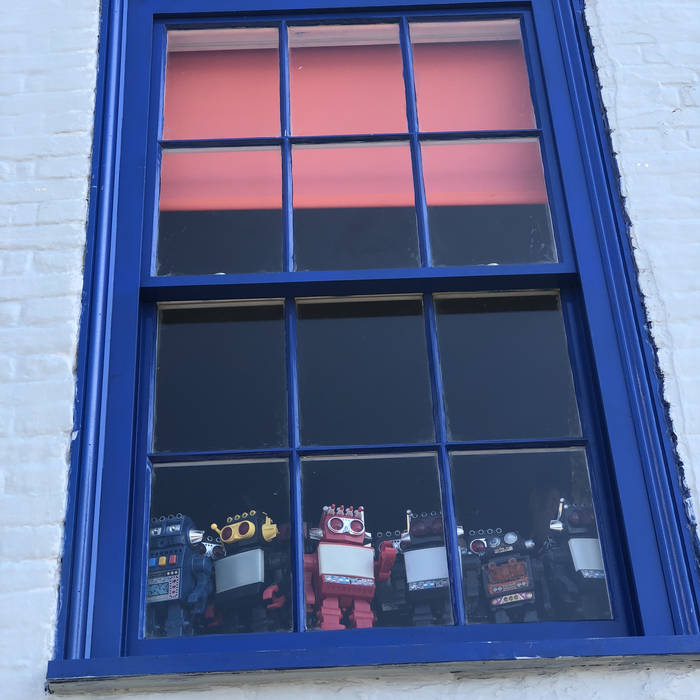 "Well, this was a surprise! If you told me that a Brit teenager who very likely has a nigh empty swearing jar and his pal, armed with just a guitar, a keyboard (no drums) and Garageband (prolly) would make one of the best punk albums I've heard in the last few years, I'd balk.

When Bruno sent me this, I wasn't looking forward to listening. Lately, I'm getting sent a lot of stuff by bands and artists and, while most of it isn't necessarily legit bad, I'm starting to get a bit overwhelmed. I suppose that's a good problem to have; apparently my opinion / favor is a desired thing - my head would swell if it weren't for all of the pressure!

So yeah, I was not expecting anything and, well, maybe that was the best way to experience Bruno and the Outrageous Methods of Presentation (from herein - B&OMP because - holy shit (dollar to the swear jar), that's a typeful!) Scree.

The EP starts of promisingly enough with "Bearing Grudges is Not a Good Thing to Do", a blistering two chord Stooge-oid hate song with Bruno's snot-nosed vox. It's all over in just over a minute and I'm thinking "okay, not bad". This is followed by the album's longest runner in just under seven minutes with the awesomely titled "78 RPM in the Microwave", which takes a more psychedelic route with the same tools, recalling Loop, Royal Trux, Throbbing Gristle and Vizusa - but more identifiably "punk" than most of those acts.

Next up is a track that dropped my damn jaw: "Special Edition, Limited Edition, Collectors Edition. it Don't Mean Nothing.". A track spewing acid all over we collector scum in a simple and brutally effective manner. Opening with a clean electric guitar pounding out a catchy, grunge punk riff and a poorly executed KAZOO accompaniment, Bruno comes in babbling a mouth riff before growling, his words carrying a truth as only a kid could deliver it:
"When it says 'Special Edition'
Well you know, that don't mean
Nothing"

The following lyrics get punctuated by Bruno's over annuciating "It means nothing, Hun-AYY, Ain't gonna spend my Mun-AE" like a seasoned pro while guitarist Matthew revs up and plods down the riff because, why the fuck not (dollar to the swear jar) - it's one riff, gotta force the dynamic somehow.

"Just Sitting Around" well, I feel personally attacked!
"Everybody just Drinkin' Coffee, Everybody just Sittin' Around!"
That's the song's lone lyric which Bruno peats and repeats until his snot-nosed delivery becomes more than the track can bear and it sonically begins to distort itself into digital, fuzz blasted fragments that sound more like 8-bit video game blurts burping up from silence than a voice.

"A Load of Toss" is the better track with more lyrics and that heavy fuzztone, though Bruno makes the mistake of doing the overload of "Just Sitting Around" - it's probably more interestingly executed here but, you can't return to a Lazarus Pit more than once, Batman.

The album closes with "So So Sanity" which adds an organ to the snot 'n' fuzz.

Really fuckin' good (dollar to the swear jar) looking foward to whatever is next (maybe a drummer??)." - Mars Hottentot, Rate Yr Music

Bruno and the Outrageous Methods of Presentation Bristol, UK

Bruno and the Outrageous Methods of Presentation is a situationist / aktionist rock 'n' roll group masterminded by the precocious teenage brat, that is, Bruno Bof Wilkinson. They play a unique and staunchly uncompromising brand of outsider scum-rock heavily influenced by various forms of occult underground sounds. ... more

Bandcamp Daily  your guide to the world of Bandcamp

outré black metal, with a Victory Over the Sun interview and music from Liturgy and Jute Gyte.